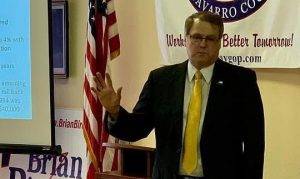 Birdwell credited legislators for reducing the roll back tax rate for the first ti,me since 1981.  Reducing the roll back tax rate, now called the ‘voter approval tax rate’, means property owners will see relief on their tax bill.  In a chart provided, Birdwell showed the savings from a median home priced at $187,392 would be $735 to $1,066.  These changes will take effect in 2020.

According to Birdwell, the Senate placed more power in the hands of the people and increased the accountability of local authorities by passing Senate Bill 2.  The bill allows cities and counties to deduct the cost of indigent care and defense before calculating the effective tax rate, which will now be known as the ‘no new revenue rate.’  “Voters will have a say in their tax rates,” Birdwell said.

Questions will be asked on November ballots, which generally have the highest turn out of any other election.

Provisions in the bill mandate that Independent School Districts must first conduct an efficiency audit before seeking an increase from the voters above the 2.5 percent rate.  City and counties with a population greater than 30,000 will see their rate reduced from 8 percent to 3.5 percent.

Other taxing bodies including hospitals, community colleges, special utilities, and libraries will see no reduction from tge current 8 percent they can levy.  Municipal management entities will also remain at 8 percent until the project has reached the threshold of 95 percent build out.  At that time, the tax rate reverts to 3.5 percent.  Property owners will have greater opportunity to appeal their property’s appraised value following the passage of SB-2.

Birdwell also touched on legislation dealing with school financing and safety.  The school safety bill, which was co-sponsored in the House by Cody Harris — who represents House District 8 including Hill, Anderson, Freestone, and Navarro Counties — provided a one-time grant for school hardening,  something Birdwell said was a priority following the school shooting at Santa Fe High School in 2018.

Corsicana ISD Superintendent Diane Frost noted that they were ahead of the curve on many of the provisions of the school safety bill, during the Corsicana Board of Trustees June meeting.

Birdwell talked about retired teachers.  The state will contribute #1.113 bllion to the teachers’ pension fund within the next five years.  All current retirees will receive a check from the state capped at $2,000.  Birdwell said there is no cost of living increase anticipated.  “This was the only way we could make the teachers’ retirement system sound,” he said.

Birdwell discussed the right to life bill, the first amendment and religious liberty bills, as well as natural resources and economic development legislation.  He also highlighted his work on the sunset commission, and the Battleship Texas Workgroup.

The Geanbury Republican announced he will seek re-election to State Senate District 22 next year.  The retired Army Lieutenant Colonel said that, excluding immigration, he considers maintaining Texas values to be one of the biggest challenges facing the state in the coming years.  “We welcome people from other states, but they ought to know why they are coming here,” he said.

Before discussing regular business, local Republicans acknowledged the recent passing of United States Air Force Col. Keith Burres (Ret.).  Burres was an election judge, precinct chair, and served as Vice Chairman of the Navarro County Republicans for a time.  He will be greatly missed by many. 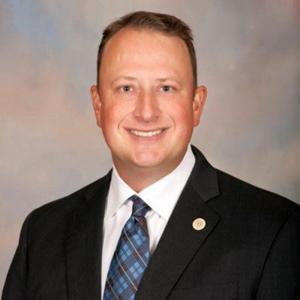 Navarro County Republican Chairman Eric Meyers said, “Winning Texas is going to be a battle next year and in the future.  We are going to have to work to keep Navarro County and Texas Red.”

The Chairman announced that the first day to sign up to be precinct chair is September 10.  The first day for candidates to file will be November 9.  “Notaries will be available and lunch will be provided,” Meyers said.

The next regular meeting of the Navarro County Republican Party is scheduled for October 8.  Meetings are held at Republican Headquarters 111-B West Third Avenue in Corsicana.

AUSTIN – Attorney General Ken Paxton today applauded the Texas Supreme Court for ruling that election officials in Dallas, Cameron, El Paso, Harris and Travis Counties are incorrect to include fear of contracting COVID-19 as a “disability” on mail-in ballot applications. Election law established by the Texas Legislature generally requires in-person voting, and allows mail balloting only for certain limited groups, including those with actual disabilities that render them unable to vote in-person.

“I applaud the Texas Supreme Court for ruling that certain election officials’ definition of ‘disability’ does not trump that of the Legislature, which has determined that widespread mail-in balloting carries unacceptable risks of corruption and fraud,” said Attorney General Paxton. “Election officials have a duty to reject mail-in ballot applications from voters who are not entitled to vote by mail. In-person voting is the surest way to maintain the integrity of our elections, prevent voter fraud and guarantee that every voter is who they claim to be.”

“Disability,” as that term is used in the Texas Election Code’s provisions allowing voting by mail, must involve “sickness or physical condition” that prevents a voter from voting in person on election day without a likelihood of needing personal assistance or of injuring the voter’s health. A voter ill with COVID-19 and who meets those requirements may apply for a ballot by mail. Fear of contracting COVID-19, however, is a normal emotional reaction to the current pandemic and does not amount to an actual disability that qualifies a voter to receive a ballot by mail.

Wonderful. We can walk in & vote !! Mail in votes aren't fraud proof.

The U.S. House of Representatives is poised to make history by conducting the first proxy vote ever since Congress first met in 1789. #gop #txgop ... See MoreSee Less

The U.S. House of Representatives made history Wednesday by conducting its first proxy vote since Congress first met in 1789 -- as Republicans raised alarms over the temporary voting system implemente...
View on Facebook
·Share

The fact that suddenly some are saying they can’t leave home when they have been caught shopping for jewelry, traveling to their estates in another state and other things is just ludicrous. Get to Washington and do the jobs you gave yourself a recent huge raise to do. I for one would love to see people who receive Social Security get a raise like you gave yourselves. 😡😡😡

The current Democratic party is certainly not Democratic Party if yesterday. They are so anti-American. So deadly. So selfish. So PRO GOVERNMENT. PRO TAKE OVER LIVES. SO SAD

Vote Republican and get rid of them

Any bets on how many extra votes they get?

Hope they are successful!

Good. Do it. They're trying to legislate from their easychairs at home, where we the people can't get them to answer for their choices.

I pray light will be shone on darkness and truth will prevail.

I don't see the problem 🤷‍♀️

Reports that President Trump will lose the next election by a landslide appear to be odds with publicly available approval ratings.
View on Facebook
·Share

If they can stop democrats from stealing and cheating the election.

Don't get people over confident. We still need them to go vote. The Democrates are digging up votes as we speak. (At the cemetary)

We can't get complicit, we must all turn out to vote. Trump 2020

They hate her. They can’t stand her. Why? Because she simply doesn’t give in to the relentless bashing of our President. Sorry, media: You’re not victims no matter how much ‘abuse’ you take! #gop #txgop Kayleigh McEnany ... See MoreSee Less

Sorry, media: You’re not victims no matter how much ‘abuse’ you take

Is there anything more tedious than the press complaining about how it’s treated? After grousing that Stephanie Grisham, President Trump’s former press secretary, never held a formal briefing,…
View on Facebook
·Share

They can dish it out but they can't take it.