Harris talked in detail about property tax reduction and education funding reform legislation, which were priorities during the eighty-sixth Legislative session.  By passing Senate Bill 3, the state increased its share of funding for public education into the 40% range and set aside $2 billion to fund pay raises. “Every school district in House District 8 received a substantial increase, including $1 million for Corsicana ISD,” Harris said.

The legislature made strides to reduce standardized testing, breaking up the tests over the course of the school year, a change Harris believes will help that students and teachers.  “My hope is that we continue to scale back standardized tests and untie the hands of our teachers.  They know how to do it better than some bureaucrat in Austin,” he said.

The Palestine Republican was appointed to the Natural Resources, Energy Resources, and Local and Consent Calendar committees during his first term. 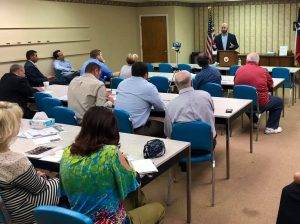 Harris touched on the issue of illegal immigration and faulted the Federal Government for not doing their job to secure the Southern Border.  The Texas legislature passed $800 million in funding to pay more men and material this session.  The issue is one of national and economic security according to Harris, who said the issue is also a humanitarian concern.  “It’s human trafficking in its worst form,” he said.  “Children are being used so that others may cross and gain asylum.”

Harris spoke about right to life legislation which requires doctors to provide care to those who survive ‘botched’ abortions.

Navarro County resident Liz Smith praised the effort, but questioned how the law would be enforced.  Harris admitted that enforcement of the law would be difficult, though he is hopeful that human nature would move someone to act on behalf of the child.

There were discussions about school safety and legislation dealing with mental health efforts inside schools.  Guns aren’t the issue he said when asked by an audience member about automatic weapons.  Teachers and coaches have to be able to reach out to that kid if they see something wrong, but Harris stressed that parental consent is the final stop on everything involved with the passage of the mental health and school safety bill.

Harris also discussed the High Speed Rail project which is proposed to connect Houston with Dallas.  Harris spoke out against the project while a candidate during an open meeting held in Navarro County with representatives of Texas Central Railway in January 2018.  Harris said that there is a marathon hearing where members of the House were able to put Texas Central on the record and expose what was going on.  There were 24 bills aimed at giving property owners protections against eminent domain abuses, but none of them made it out of committee.  Harris admitted that Texas Central has a powerful lobby.

Harris did point to recent judicial victories, including a final judgement in Leon County which was the first definitive ruling, which stated that the project was not a railroad and didn’t meet the requirements for eminent domain.  According to Harris, this was a huge blow.  Harris also reported that the National Transportation and Safety Board denied High Speed Rail’s request to take jurisdiction over the project.

Harris concluded his remarks by bringing up the importance for keeping Texas Republican.  “If Texas turns blue, the Texas we know and love will be gone,” he said.  “Without an informed electorate, our state and country are in dire trouble.”  Harris encouraged people to contact their representatives and discuss issues with them.