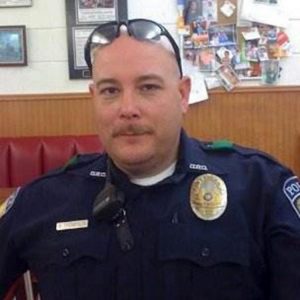 Officers from Dallas and DART joined local law enforcement agencies as the Corsicana Parks and Recreation Department and friends and family of the late Brent Thompson, unveiled a bronze statue in his honor Saturday July 27 on the corner of Sixth Avenue and Beaton Street.

Corsicana native Officer Brent Thompson of the Dallas Area Rapid Transit Police Department was killed in the line of duty July 7, 2016 during a shootout with a man who had just killed three Dallas police officers and wounded three others with an assault rifle.

Based upon the last picture taken of Thompson, the statue depicts the officer writing a mock ticket to two kids.  The boy statue was made to resemble Thompson’s son William, who passed away in 2017. 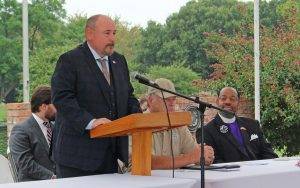 The statue is holding a notepad with “Heaven’s Roll Call” written on it with the names of William and Brent’s late brother and Navarro County District Attorney R. Lowell Thompson, who passed away in October 2018.

“You’re all a part of my extended family,” his brother Darrell said, addressing the crowd during the dedication ceremony.  The statue was delivered and installed on July 26, Brent’s birthday.

Thompson’s actions on the night of his death created a distraction that allowed others to aid the wounded and gave cover to officers so they could force the attacker inside a building where he was killed by the Dallas Police SWAT team. 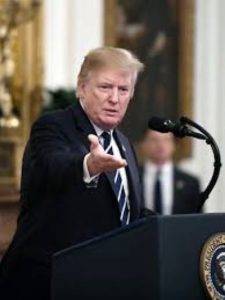 President Donald Trump awards fallen DART Officer Brent Thompson the Medal Of Valor at the East Room of the White House, with his widow and parents attending.

President Donald Trump posthumously awarded Thompson the Medal of Valor in May, the nation’s highest honor for bravery by a public safety officer.

The new statue has been added to the audio tour of Corsicana’s Bronze Statues, highlighting some of the community’s most influential people, available at www.visitcorsicana.com/bronzes.

The script of the audio tour is as follows:

He lived to serve others.  He died doing just that on a tragic night in Dallas in 2016.

The Corsicana native was working as an officer with the Dallas Area Rapid Transit Police Department, on duty the night of a rally in downtown Dallas on July 7, 2016, when shots rang out following the event.  A sniper firing on the crowd was reported to be targeting police officers.  Brent Thompson charged the gunman and wounded him, saving many lives by doing so.  But Thomson and four other Dallas Police Department officers would be killed in the hail of gunfire, and a dozen officers wounded before the attack ended with the death of the gunman.

Brent Thompson was a graduate of Corsicana High School.  He knew at an early age he wanted to be a policeman.  He attended the Navarro College Police Academy, and worked for the Navarro County Sheriff’s Office and the Corsicana Independent School District Police Department.  He also served his country as a U.S. Marine, and then as a trainer of military policemen in the Middle East before joining the DART Police Department.  He was the first DART officer to be killed in duty.

His tragic death came just two weeks after marrying a fellow DART officer, and two weeks before what would have been his 44th birthday.

All who knew Brent Thompson remembered him as a brave and honorable man who loved his family and loved his work.  The Navarro College Police Academy established a memorial scholarship in Thompson’s memory, and the 100 Club of Navarro County recognizes a law enforcement officer each year with the Brent Thompson Officer of the Year Award. 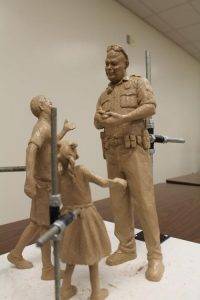 Among the numerous tributes and memorials since his death in 2016, Thompson and the four Dallas officers killed were awarded the State Medal of Valor in 2017.  In 2019, Thompson was posthumously awarded the national Public Safety Medal of Valor, presented to his parents by President Donald Trump in a White House ceremony.

The bronze in tribute to Brent Thompson’s life shows the officer playfully interacting with two small children.  The boy in the statue is in the likeness of Thompson’s son William, who passed away in 2017.  Artist J. Payne Lara created the bronze, paid for entirely by numerous individuals and organizations.