Governor Greg Abbott rallied Navarro County Republicans Friday March 6 at this year’s Reagan Day Dinner.  The annual fundraiser was a culmination of a successful week for the Party which saw 79% of local ballots cast for Republicans in the March 3 Primary Election.

“That trend will continue,” said Eric R. Meyers,  Navarro County Republican Chairman, “but only if Republicans continue to build the base by educating and energizing voters.”

Governor Abbott echoed that message during his address at the IOOF Event Center in Corsicana, which hosted the dinner’s record crowd.  Abbot said he hoped that percentage would grow:

“In order to keep Texas red, I hope the rest of Texas would vote thew way Navarro County did,” he said.  “We are going to crush the Democrats this election year.”  Abbott discussed the state’s economic successes, referencing Aubobon Metals Texas which will bring 100 jobs and $50 million in capital investment to Navarro County.  Texas ‘ economy ranks as the 10th largest worldwide, and has led the nation in economic development for eight years running.

Corsicana Mayor Don Denbow characterized the governor’s economic message as inspirational.  “Having the governor’s personal touch in the legislature is going to pay dividends for Republicans,” he said. 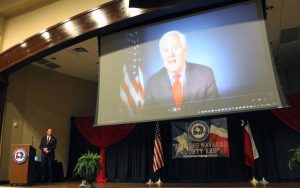 Abbott warned against voter complacency, telling the crowd that Socialists are running for the Texas House, Senate, ans Supreme Court.  “When you take things for granted, you may just lose.” he said.  Abbott challenged everyone to knock on doors and engage everyone in the fight to keep Texas red.  “To save America, we must win in Texas,” he said.  The Governor’s words were met with thunderous applause.

State Representative Cody Harris, who represents Hill, Anderson, Freestone, and Navarro counties, said the Governor delivered a great speech.  “Governor Abbott is going to be on the front lines helping to make sure we keep Texas Texas,” said the first term Representative from Palestine.  Harris said his future legislative priorities include additional property tax relief.  He will face Libertarian candidate Ed Adams of Corsicana in the November General Election. 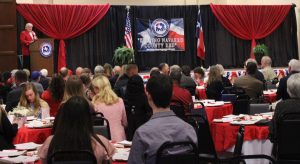 Abbott also told the crowd that a secure Texas border is a priority.  “We will never allow Texas to become a sanctuary state,” he said.  Abbott also pointed out the compassion of lawmakers who passed stiffer human trafficking laws during the last session.

“The first requirement to win the battle is to be on the field,” said Republican State Senator Brian Birdwell, who represents Navarro County.  “Whether it’s the White House or the County Courthouse, the job in November is to run up the score.”  The Granbury resident was first elected to the Texas Senate in 2010.  He will face the former Chairman of Hood County Democrats, Robert Vick, in November. 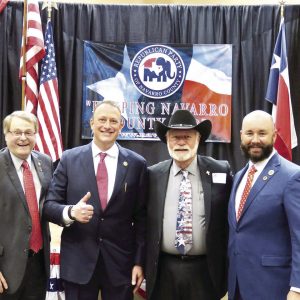 Navarro County Republican Chairman Eric R. Meyers, acknowledged special guest Jack Wilson, who had received the Governor’s Medal of Courage, Texas’ highest civilian award, when he shot and killed an attacker who opened fire during a church service in White Settlement.  Wilson’s quick action is credited with limiting the loss of life to two victim in addition to the shooter.

Meyers presented the 2020 Lifetime Service Award to John Curtis.  The longtime Navarro County Republican began serving as a Precinct Chair in the mid 1990’s, when he and seven other Republicans met in the garage of a service station.   Curtis resigned last year as Vice Chairman.  At the time, he said, he wanted to give others an opportunity, and enjoy retirement.  Curtis said the recognition was a tremendous honor.  He acknowledged those remaining of the original seven.  “Look what we have done,” he said, “a lot for the community, society, and nation.” 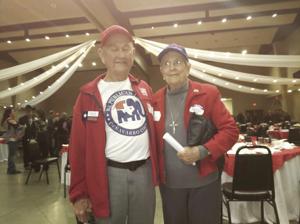 Meyers also presented Kimberly Cobb with the Volunteer Of The Year award.  Cobb serves as Treasurer for the Navarro County Republicans.

Meyers considered the dinner to be a financial and attendance success.  “The event was awe-inspiring,” he said.  “State Senator Brian Birdwell, Representative Cody Harris, and Governor Abbott provided what was truly a rallying cry for all Republicans.” 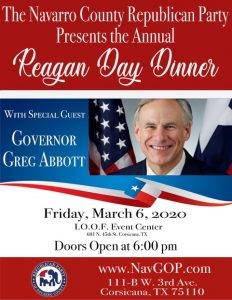