During World War II, the Battle of Normandy, which lasted from June 1944 to August 1944, resulted in the Allied liberation of Western Europe from Nazi Germany’s control.  Code-named “Operation Overlord”, the battle began on June 6, 1944, also known as D-Day, when some 156,000 American, British, and Canadian forces landed on five beaches along a 50-mile stretch on the heavily fortified coast of France’s Normandy region.  The invasion was one of the largest amphibious military assaults in history and required extensive planning.  Prior to D-Day, the Allies conducted a large-scale deception campaign designed to mislead the Germans about the intended invasion target.  By late August 1944, all of northern France had been liberated, and by the following spring, the Allies had defeated the Germans.  The Normandy landings have been called the beginning of the end of war in Europe.

After World War II began in 1939, Germany invaded and occupied northwestern France beginning in May 1940.  The Americans entered the war in December 1941, and by 1942, they and the British (who had been evacuated from the beaches of Dunkirk in May 1940, after being cut-off by the Germans in the Battle of France) were considering the possibility of a major Allied invasion across the English Channel.  The following year, Allied plans for a cross-Channel invasion began to ramp up.  In November 1943, Adolf Hitler (1889-1945), who was aware of the threat of an invasion along France’s northern coast, put Erwin Rommel (1891-1944) in charge of spearheading defense operations in the region, even though the Germans did not know exactly where the Allies would strike.  Hitler charged Rommel with finishing the Atlantic Wall, a 2,400 mile fortification of bunkers, landmines, and water obstacles.

In January 1944, General Dwight D. Eisenhower (1890-1969) was appointed commander of Operation Overlord.  In the months and weeks before D-Day, the Allies carried-out a massive deception operation intended to make the Germans think the main invasion target was Pas-de-Calais (the narrowest point between Britain and France) rather than Normandy.  In addition, they led the Germans to believe that Norway and other locations were potential invasion targets.  Many tactics were used to carry-out the deception, including fake equipment; a phantom army commanded by George Patton and supposedly based in England, across from Pas-de-Calais; double agents; and fraudulent radio transmissions. 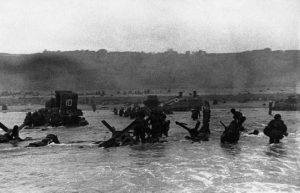 Eisenhower selected June 5, 1944, as the date for the invasion; however, bad weather on the days leading up to the operation caused it to be delayed for 24 hours.  On the morning of June 5, after his meteorologist predicted improved conditions for the following day, Eisenhower gave the go-ahead for Operation Overlord.  He told the troops: “You are about to embark upon the Great Crusade, toward which we have striven for these many months.  The eyes of the world are upon you.”

Later that day, more than 5,000 ships and landing craft carrying troops and supplies left England for the trip across the Channel to France, while more than 11,000 aircraft were mobilized to provide air cover and support the invasion. 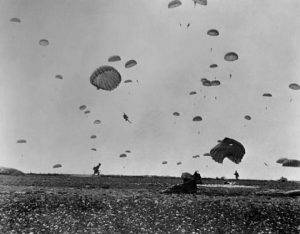 By dawn on June 6, thousands of paratroopers and glider troops were already on the ground behind enemy lines, securing bridges and exit roads.  The amphibious invasions began 6:30 a.m.  The British and Canadians overcame light opposition to capture beaches code-named Gold, Juno, and Sword, as did the Americans at Utah Beach.  U.S. forces faced heavy resistance at Omaha Beach, where there were over 2,000 American Casualties.  However, by day’s end, approximately 156,000 Allied troops had successfully stormed Normandy’s beaches.  According to some estimates, more than 4,000 Allied troops lost their lives in the D-Day invasion, with thousands more wounded or missing.

D-Day casualties, including those killed, wounded, or missing: 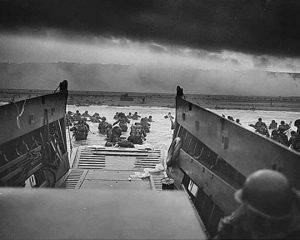 U.S. soldiers wade through the sea towards the Normandy beaches. 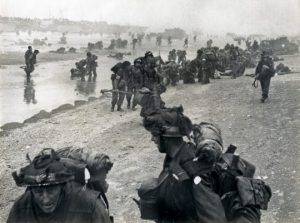 Less than a week later, the Germans suffered from confusion in the ranks and the absence of celebrated commander Rommel, who was away on leave.  At first, Hitler, believing the invasion was a feint designed to distract the Germans from a coming attack north of the Seine River, refused to release nearby divisions to join the counterattack.  Reinforcements had to be called from further afield, causing delays.  He also hesitated in calling for armored divisions to help in the defense.  Moreover, the Germans were hampered by effective Allied air support, which took out many key bridges and forced the Germans to take long detours, as well as efficient Allied naval support, which helped protect advancing Allied troops. 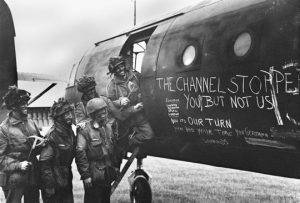 In the ensuing weeks, the Allies fought their way across the Normandy countryside in the face of determined German resistance, as well as a dense landscape of marshes and hedgerows.  By the end of June, the Allies had seized the vital port of Cherbourg, landed approximately 850,00 men and 150,000 vehicles in Normandy, and were poised to continue their march across France.

By the end of August 1944, the Allies had reached the Seine River, Paris was liberated, and the Germans had been removed from northwestern France, effectively concluding the Battle of Normandy.  The Allied forces then prepared to enter Germany, where they would meet up with Soviet troops moving in from the east.

The Normandy invasion began to turn the tide against the Nazis.  A significant psychological blow, it also prevented Hitler from sending troops from France to build up his Eastern Front against the advancing Soviets.  The following spring, on May 8, 1945. the Allies formally accepted the unconditional surrender of Nazi Germany.  Hitler had committed suicide a week earlier, on April 30.

Only way to keep the voice of rural/ low populace areas