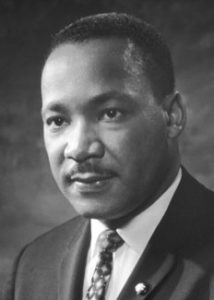 Martin Luther King, Jr., (January 15, 1929 – April 4, 1968) was born in Atlanta GA into a family of preachers.  His grandfather began the family’s long tenure as pastors of the Ebenezer Baptist Church in Atlanta, serving from 1914 to 1931; his father has served from then until 1975, and Martin Luther acted as co-pastor from 1960 until his death.

King was born as born as “Michael.”  When he was five years old, his father changed both their names to Martin Luther King.  The move followed a trip to Germany by the elder King where he was inspired by the Protestant Reformation leader.

A gifted student, Martin Luther attended segregated public schools in Georgia, graduating from high school at the age of fifteen; he received the B.A. degree in 1948 from Morehouse College, a distinguished Negro institution of Atlanta from which both his father and grandfather had graduated.  King did not intend to follow their path, originally studying medicine and law, but chose the ministry in his senior year at Morehouse.  After three years of theological study at Crozer Theological Seminary in Pennsylvania where he was elected president of a predominately white senior class, he was awarded the Bachelor of Divinity degree in 1951.  With a fellowship won at Crozer, he enrolled in graduate studies at Boston University, completing his residence for the doctorate in 1953 and receiving the degree in 1955.  In Boston he met and married Coretta Scott, a young woman of uncommon intellectual and artistic attainments.  Two sons and two daughters were born into the family.

In 1954, at age 25, Martin Luther King, Jr. became pastor of the Dexter Avenue Baptist Church in Montgomery, Alabama.  Always a strong worker for civil rights, King was a member of the executive committee of the National Association for the Advancement of Colored People (NAACP), the leading organization of its kind in the nation.  In December of the same year, Rosa Parks, an African American woman refused to give her seat to a white man on a Montgomery bus.   Immediately following this incident in 1955, King accepted the leadership of the Montgomery bus boycott, the first great African American nonviolent demonstration of contemporary times in the United States.  The boycott lasted 382 days.  On December 21, 1956, after the Supreme Court of the United States had declared unconstitutional the laws requiring segregation on buses, blacks and whites rode on buses as equals.  During these days of boycott, King was arrested, his home bombed and he was subjected to personal abuse, but at the same time he emerged as a African American leader of the first rank. 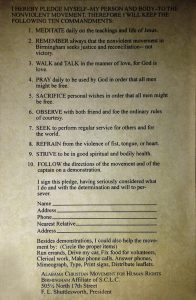 In 1957, Dr. King was elected president of the Southern Christian Leadership Conference, an organization formed to provide new leadership for the now flourishing civil rights movement by organizing Black churches.  The ideals for this organization he took from Christianity.  The Alabama Christian Movement for Human Rights was an organization he worked with closely in Birmingham.  Their Ten Commandments Pledge that each member signed before joining, which should be followed by every citizen today (left).

In 1960, King moved his family to his native city of Atlanta, joining his father as co-pastor of Ebenezer Baptist Church.

In the eleven-year period between 1957 and 1968. Dr. King traveled over six million miles and spoke over twenty-five hundred times, appearing wherever there was injustice, protest, and action.  Meanwhile, he wrote five books as well as numerous articles.  In these years, he led a massive protest in Birmingham, Alabama, that caught the attention of the entire world, providing what he called a coalition of conscience, and inspiring his “Letter from a Birmingham Jail” — a manifesto of the civil rights revolution.

On August 28, 1963, Dr. King directed the peaceful march on Washington, D.C.  More than 250,000 people gathered in a peaceful interracial assembly at the Lincoln Memorial, to whom he delivered his address, “I Have a Dream”.   In that famous oration, King painted a verbal picture of racial freedom and unity — a world where children of all ethnicities could sit at the table of brotherhood.  A nation where segregation was a memory and all people are ‘created equal’ based upon the Declaration of Independence freedoms described by our country’s Founding Fathers.  A culture where people are judged by character instead of color.  He longed for a time when justice — a recurring theme in his speech — rolled on like a river and flowed like an endless stream, in quoting the biblical prophet Amos 5:24.  This pastor practiced many First Amendment rights guaranteed by the Constitution:  religion (or consciousness), press, speech, assembly, and petition — yet he was arrested and assaulted.  He was awarded five honorary degrees and named Man of the Year by Time magazine in 1963. 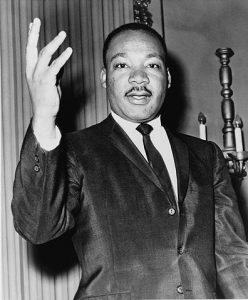 In 1964, at the age of thirty-five, Martin Luther King, Jr., was the youngest man to have received the Nobel Peace Prize, because of his use of non-violent protests during the Civil Rights movement.  When notified of his selection, he announced that he would turn over the prize money of $54,123 to the furtherance of the civil rights movement.  The passage of the Civil Rights Act allowed the federal government to enforce desegregation of public accommodations and outlawing discrimination in publicly owned facilities & employment.  The 1965 Voting Rights Act was signed into law.

On the evening of April 4, 1968, while standing on the balcony of his motel room in Memphis, Tennessee, where he was to lead a protest march in sympathy with striking garbage workers of that city, he was assassinated.

Many believe America still has a long way to go before Dr. King’s dream is fulfilled.  The progress we have made as a nation over the decades has made America the least racist country in the world, but we are continually challenged as a people to eradicate injustice.  We can work today for a better tomorrow.