Ron and Susan Wright shared a deep and abiding relationship with their Lord and Savior.  For that reason, Ron remained stoic in the face of his health challenges and incredibly upbeat about the future of the state and the nation he loved so much.

U.S. Congressman Ron Wright passed away peacefully at the age of 67 on Sunday evening February 7, 2021.  His wife Susan was by his side and he is now in the presence of their Lord and Savior. 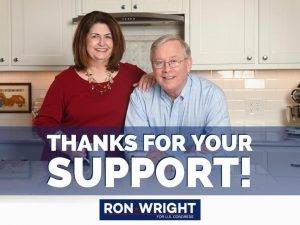 Over the past few years, Congressman Wright had kept a rigorous work schedule on the floor of the U.S. House of Representatives and at home in Texas’ Congressional District 6 while being treated for cancer.  For the previous two weeks, Ron and Susan had been admitted to Baylor Hospital in Dallas after contracting COVID-19.

Congressman Wright will be remembered as a constitutional conservative.  He was a statesman, not an ideologue.  Ron and Susan dedicated their lives to fighting for individual freedom, Texas values. and above all, the lives of the unborn.

As friends, family, and many of his constituents will know, Ron maintained his quick wit and optimism until the very end.  Despite years of painful, sometimes debilitating treatment for cancer, Ron never lacked the desire to get up and go to work, to motivate those around him, or to offer fatherly advice.

We ask that everyone give Susan and the entire Wright family and staff time to grieve.  Additional information will be available on funeral arrangements and ways to honor Congressman Wright in the days to come.

Congressman Wright is survived by his wife Susan; his son Derek; his son Justin and wife Susan; his daughter Rachel and husband Jeff; his brother Gary and wife Janis; nine grandchildren; cousins and extended family.

Finally, brothers and sisters, what ever is true, whatever is noble, whatever is right, whatever is pure, whatever is lovely, whatever is admirable — if anything is excellent or praiseworthy — think about such things.  Whatever you have learned or received or heard from me, or seen in me — put it into practice.  And the God of peace will be with you.

“I am deeply saddened to learn of the passing of U.S. Representative Ron Wright.  Ron was a principled leader who fought to preserve Texas values and was an exemplary representative of his district.  His personal strength and commitment to standing up for the unborn were unwavering.   He leaves behind a tremendous legacy for future generations of Texans.  Cecilia and I send our prayers to Ron’s wife, Susan, his family and loved ones.”  — Texas Governor Greg Abbott

“Ron was a passionate public servant and a strong advocate for Texas values, his neighbors in North Texas, and constituents across Texas’ 6th District.  A sixth-generation resident of Tarrant County, he was a Texan first and foremost, and we saw that every day, as he put his community first.  My heart goes out to his wife, Susan, and his children and grandchildren, whom I hope find solace in his legacy of service.” — U.S. Senator John Cornyn (R-TX)

“Our deepest condolences go to Susan Wright and Ron’s family during this extremely difficult time.  Ron was a true conservative champion for our district and will be deeply missed.” — Eric R. Meyers, Chairman, Republican Party of Navarro County

“Congressman Ron Wright has represented the Sixth Congressional District of Texas, including Ellis and Navarro County, and the southeast corner of Tarrant County, since January 2019.  He was a big supporter of Navarro College and our programs.  We deeply appreciated his support.  Congressman Wright, you will be missed dearly.” — Navarro College