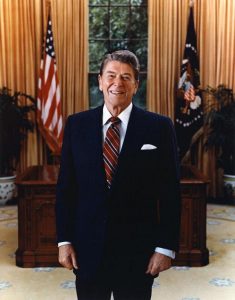 President Ronald Reagan knew how to commemorate Passover and Easter.  In 1983, he gave a powerful radio address to the American people on how the Judeo-Christian tradition was deeply associated with freedom and our values.  He acknowledged the struggle of the Jewish people over oppression, the promise of the resurrection of Jesus Christ, and the season to “give thanks for our blessings.”

“This week, Jewish families and friends have been celebrating Passover, a tradition rich in symbolism and meaning.  Its observance reminds all of us that the struggle for freedom and the battle against oppression waged by Jews since ancient times is one shared by people everywhere,” Reagan said.

“And Christians have been commemorating the last momentous days leading to the crucifixion of Jesus 1,950 years ago.  Tomorrow, as morning spreads around the planet, we’ll celebrate the triumph of life over death, the resurrection of Jesus.  Both observances tell of sacrifice and pain, but also of hope and triumph,” he continued.

In the six-and-a-half-minute address, Reagan talks about topics that seem relevant even today and turns to God as the answer for the suffering in the world.

“This is a time of hope and peace, when our spirits are filled and lifted,” Reagan said.  “It’s a time when we give thanks for our blessings, chief among them freedom, peace, and the promise of eternal life.”

Reagan also spoke of those who dared to exercise their faith behind the Iron Curtain, where atheism was state-imposed and any deviation from it was seriously punishable.

“For example, the brave Polish people, despite the oppression of a godless tyranny, still cling to their faith and their belief in freedom.  Shortly after Palm Sunday Mass this week, Lech Walesa faced a cheering crowd of workers outside a Gdansk church.  He held his hand up in a sign of victory and predicted. ‘The time will come when we will win.'”

Reagan spoke of more mundane heroes, though — including an East German professor who had risked his families’ lives to come over to the West.

“Recently, an East German professor, his wife, and two daughters, climbed into a 7-foot rowboat and crossed the freezing wind-whipped Baltic to escape from tyranny,” Reagan said.  “Arriving in West Germany after a harrowing seven-hour, 31-mile journey past East German border patrols, the man said he and his family had risked everything so that the children would have the chance to grow up in freedom.”

Then as now, European communists weren’t the only ones trampling religious freedom; South Americans communists were also doing so.  In Nicaragua, where Pope John Paul II had just visited when this speech was given, the socialist government had done everything possible to disrupt the visit and perturb the faithful.

“As he conducted a Mass in Nicaragua, state police jeered and led organized heckling by Sandinista supporters,” Reagan said.  “But the Pope lifted a crucifix above his head and waved it at the crowd before him, then turned and symbolically held it up before the massive painting of Sandinista soldiers that loomed behind.  The symbol of good prevailed.”

In recent years, of course presidents have visited communist countries and said, inconceivably, that we can learn from them on human rights.

“During these days at least, regardless of nationality, region or race, we are united by faith in God and barriers between us seem less significant,” Reagan said.  “Observing the rites of Passover and Easter, we are linked in time to the ancient origins of our values and to the unborn generations who will still celebrate them long after we’re gone.”

Reagan spoke about a letter he received from school children who said they hoped for peace, “Freedom and justice.” and the ability to travel around the world without fear.

“Nearly 2,000 years after the coming of the Prince of Peace such simple wishes may still seem far from fulfillment, but we can achieve them,” Reagan said.  “We must never stop trying.”

“The generation of Americans now growing up in schools across our country, can make sure the United States will remain a force for good, a champion of peace and freedom as their parents and grandparents before them have done,” Reagan said.

“And if we live and dedicate our country to truth, to love and to God, we will be a part of something much stronger and much more enduring than any negative power here on Earth,” Reagan said.  “That’s why this weekend is a celebration and why there is hope for us all.”