The third Saturday in May is a day set aside to honor all those who are either currently serving or have served in all branches of our nation’s Armed Forces!

Unlike Veterans Day and Memorial Day, Armed Forces Day is the proper day to honor all the men and women who currently serve and all who have served, both active and former, in the reserves, National Guard, or on active duty.

On July 26, 1947, America’s military was combined under the Department of Defense, when then President Harry S. Truman signed the National Security Act into law.  It defined the term ‘Armed Forces’ meaning Army, Navy, Air Force, Marine Corps, and Coast Guard.  Two years later, the Secretary of Defense Louis Johnson created Armed Forces Day to replace the separate celebrations of each military branch.  The first celebration was held in 1950 and included parades in Washington D.C. and New York City.

Other Presidents and government officials since 1950 have issued proclamations and given speeches to celebrate Armed Forces Day.  General Dwight D. Eisenhower and 33rd U.S. President reminded the nation in his Proclamation:

“Whereas, the men and women of the armed forces of the United States are constantly demonstrating their loyalty and devotion to the service pf their country; and

Whereas, these armed forces are now engaged in combat against ruthless aggression and despotism, which threaten to destroy the freedom that this Nation cherishes; and

Whereas, these fighting forces help to maintain the strength and security of our Nation and to provide the power for peace needed in the world; and

Whereas, it is fitting and proper that we devote one day each year to paying special tribute to those whose constancy and courage constitute one of the bulwarks guarding the freedom of this Nation and the peace of the free world.

Now, Therefore, I, Dwight D. Eisenhower, President of the United States of America, do hereby proclaim Saturday, May 16, 1953, as Armed Forces Day, and I direct the Secretary of Defense and the Secretaries of the Army, the Navy, and the Air Force, as well as the Secretary of the Treasury, on behalf of the Coast Guard, to mark the designated day with appropriate ceremonies, and to cooperate with other public authorities in suitable observances.

I also invite the Governors of the States, Territories, and possessions of the United States to provide for the celebration of the day in such manner as to pay suitable honor to the members of our armed forces; and I call upon my fellow citizens not only to display the flag of the United States on Armed Forces Day, but also to show their recognition of the gallantry, sacrifice, and devotion to duty of the men and women of the armed forces by cooperating in local observances of the day.

In Witness Whereof, I have hereunto set my hand and caused the Seal of the United States of America to be affixed.

DONE at the City of Washington this seventeenth day of March, in the year of our Lord nineteen hundred and fifty-three, and of the Independence of the United States of America the one hundred and seventy seventh.” 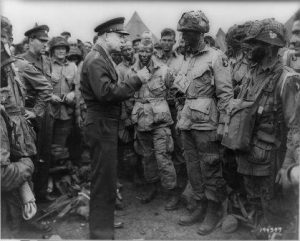 Armed Forces Day lands right in the heart of National Military Appreciation Month.  The month begins May 1 with Loyalty Day, VE (Victory in Europe) Day, Military Spouse Appreciation Day, and Armed Forces Week (third week in May).  The month of military appreciation concludes with Memorial Day, a day to honor our fallen.

Armed Forces Day was set as the third Saturday of the month of May in 1961 with President John F. Kennedy’s proclamation.

For this special celebration day, you can show your support for our military by flying the U.S. flag, thanking a military member you know, and sending messages of support to those serving.