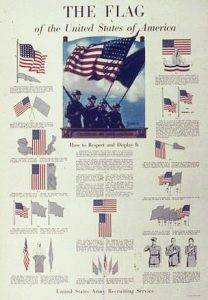 Flag Day commemorates June 14, 1777, when the Continental Congress passed a resolution “that the flag of the thirteen United States be thirteen stripes, alternate red and white; that the union be thirteen stars, white in a blue field, representing a new constellation.”  Since that time, generations of Americans have celebrated the flag as a symbol of our God-given freedoms and God-blessed nation.  In every American military campaign, “Old Glory” has been a symbol of our unique American freedoms and ideals.

Interesting, “Old Glory” was the name that American merchant sea Captain William Driver placed on the flag that had flown on his ship for years.  That nickname is now closely associated with all American flags.

The first Flag Day celebration occurred in Wisconsin in 1885, when a schoolteacher and his students observed June 14 as “Flag Birthday,” or “Flag Day.”  This idea inspired others around the nation to copy the practice.   As the celebration grew in scope and number, the idea received national recognition.  In 1916, President Woodrow Wilson issued a presidential proclamation, calling for the national celebration of Flag Day, thus establishing it as a national event. 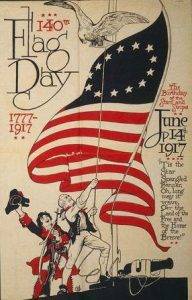 As you celebrate Flag Day, share your own patriotic sentiments and your love for America with others around you.